[ Connect with The Hardcore Review ]

Say "Bye Bye" Before You Miss It

Clubland X-Treme Hardcore 9 has flair and variation, but some songs just don't get the space to breath they deserve

No UK Hardcore has hit me strong enough to write another review since the previous Clubland last year (with the exception of one track on this very album that I will discuss soon), so here we are 12 months later with review number two. Let's crack on.

For those looking but not seeing, Clubland X-Treme Hardcore returned this week for its ninth installment, with release delayed by a month or so due to administrative issues. The CXH team of Darren Styles, Breeze and Hixxy return once more, this time with a fourth member in the form of DJ Gammer, who has been tearing up dancefloors for the best part of 15 years and, despite being named Best Hardcore DJ for three years running, gets constantly overlooked for the biggest CD booking of the year. It is nice to see Gammer get even half a disc here, where he can showcase his skills and unique take on the UK Hardcore scene. Let's get into the nitty-gritty then shall we? 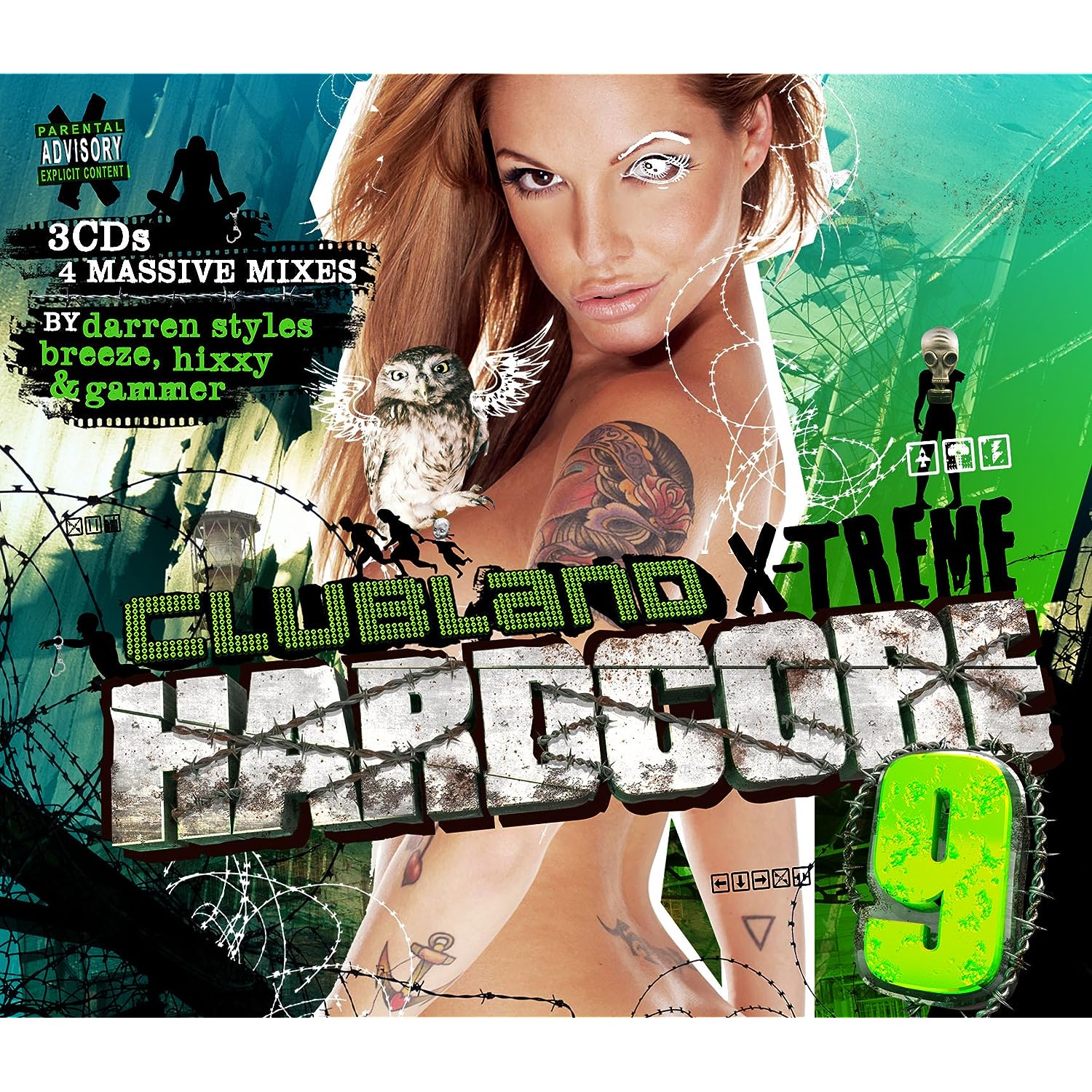 Where Clubland X-Treme Hardcore 8 experimented with new dub-like sounds and felt at times like it was finding it's feet, CXH9 feels like 12 months of testing the waters has resulted in some DJs learning how to swim. The end result at times is unworldly, with the combinations of melody and bass combinations that were sorely missing at times from last year's effort, although that's not to say the album is without faults.

Disc 1, as ever, sees Darren Styles spin his "instant classic" CD, which tends to be the tracks everyone in Hardcore knows and sings along to at events up and down the country. Styles' choice of producers is not much varied than last year, and he also borrows a couple of lesser-known dance tracks for remixing. The best results for this come from the haunting remix of "Concrete Angel" by Gareth Emery and the get-up-and-go track "The Raver", which is originally from Ayar Marar. The other track by Marar, "Unstoppable", is worth a mention because it is the first Drum & Bass track that is used on the album (but more on that later). The use of "F*ck That" by Dougal & Gammer early in the mix set the tone nicely, and I was literally jumping around my living room when I first heard that one.

The odd thing about Styles' CD is there are some songs on here which I have never heard before, and some which I probably heard six months ago or more. The first track, "Never Forget You", I first heard on SoundCloud 9 months ago, whereas I didn't know Re-Con had done the track "Gyroscope". I wouldn't say this was a problem with the album as there are many tracks I've not heard or tracks that have been altered, but the number seems higher this year than previously. Indeed, one of the best tracks on the whole album is "Paranoia" by Styles and Gammer, which has been given a twist by laying the vocals from CXH6's "Find Yourself" on top, which works very nicely, but comes off as a bit lazy. Maybe that's because I know the original version of "Paranoia" and can't hear a difference with the vocals on. Or maybe I'm being picky. Styles' disc ends with the beautiful Gammer track, "Bye Bye", which is (rightfully) given nearly 7 minutes playing time.

Mark Breeze DJs on disc 2, with his favourites Petruccio & Modulate featuring heavily much as they did last year. These two are fantastic producers and tracks such as "Escape" and "Inception" show off their talents. However Breeze's Mix is probably the weakest of all for one very simple reason: there's very little actual hardcore in it. Having looked over the tracklist, there are 6 out of 23 songs that I would class as UK Hardcore. We've been sending back 99% beef because it has 1% horse in it, so sending back a UK Hardcore CD with only 26% UK Hardcore on it would, by that logic, seem plausible. It's not that I don't enjoy some of the Drum & Bass and Dubstep stuff, but it's not why I bought a ticket. The track "Do You Like Jungle" by Jayline, remixed 'VIP' by Breeze, is just dreadful, and has no place on a UK Hardcore album.

The best track of Breeze's set is quite easily "R3tro" with Chris Unknown, although Petruccio & Modulate's "Escape" is also really rather good. But I chose "R3tro" purely because it is a UK Hardcore song, which is supposedly the premise of the album and the series. I have no issue with DJs pioneering the genre and adding their own nuances to it, and this is what Petruccio & Modulate do and do well. But for Breeze to choose only 6 songs with a kick drum led structure is, I'm sorry to say, quite embarrassing and doesn't seem to be sitting well with many UK Hardcore fans on the forums I've read. I give kudos to Breeze for trying something different, but it didn't work in my humble opinion.

Disc 3 is split between the returning Hixxy and newly instated Gammer. Hixxy's mix has a huge problem throughout, but not through track choice but rather through the recording of the mix. Having used Virtual DJ (other DJ software is available) myself thousands of times over the years, I have noticed the 'splicing' of kicks and melody notes sometimes in Hixxy's mix. It makes for messy listening and stopped me enjoying the mix as much as I would have liked. I am not judging the mix on this as it is likely a technical issue nothing to do with Hixxy at all.

Some of the tracks Hixxy has selected (and produced) for this set are great. His own remixes of "Break the Spell" and "Forgot Her Name", as well as Klubfiller's "Coming Home" are strong choices, and I was excited to hear the Chris Unknown remix of "Inspiration" which is one of my favourite tracks from the Hardcore Heaven CD era. Unknown delivers with a faithful, hard-pumping upfront version of a great song from 8 years ago. With Hixxy, you tend to know what you are going to get and it is no different here with a strong outing.

It's when you get past the 2013 version of "Power of Love", you're greeted by 'Egoraptor'. He quickly describes Gammer as a 'fucking powerdrill' and says 'this bitch's quick mixes are gonna fuck you up!'. It sets the scene for the mix, which does have Gammer's trademark fast song changes used by the man himself when DJing. And 'Egoraptor' is true to his word; three of Gammer's 21 songs (in 43 minutes) last less than 1 minute, and many others are not much longer. This brings a pace that is missing from certain other mixes, but though it is fine at a live event when you want to play as many tracks as possible, it can sometimes be a tad too frenetic for an album release. The most glaring example is "Aerodynamic/Everytime I Hear Your Name"; a hardcore take on the Daft Punk underground classic combined with the vocals from Cascada's 2009 song (also used on CXH6). I had to check I still had a pulse when the familiar guitars started, quickly followed by the vocal. But 90 seconds later, my fun is over and Gammer has moved on. I wasn't ready to move on, I needed another 90 seconds of Aerodynamic (which is, by the way, fantastically produced). This sort of things happens with many of Gammer's songs, although his philosophy is clearly 'leave them wanting more', so maybe he achieved what he wanted.

Gammer's production is unmatched in UK Hardcore right now and hasn't been for several years. Every Gammer production on this album, both in his mix and elsewhere, is world class. "Nostalgia" has been around for a while now, but still hits every Hardcore lover right in the chest when it's played, whereas "Mix Your Sex" and "Don't Leave Me" show how he brings the best out of long-time DJ partner Dougal with two tracks you have to put on repeat. Ending the album with "We Killed the Rave" is a wise decision and this updated version builds up to an amazing crescendo.

I was surprised by the omissions of Squad-E, Technikore and (for a second year running) Al Storm, but less so by the exclusion of DJ Sy due to uncertainty regarding allegations made against him in recent months. It's always nice to have a token Scott Brown track on there in some form, which Gammer adds late in his mix.

Overall, Clubland and UK Hardcore have come a long way in 12 months. Some would argue too far, but I think DJs are trying to carve out their own niche in the market now. The album is more diverse than previous efforts and each set has its own identity, which hasn't always been the case in days gone by. 2013 is set to be a big year for UK Hardcore (which I know has been said every year since 2007) with all the top names uniting under a single label (Future World Records) and there's no reason this album could not be the starting point. It may not be popular with everybody but Clubland X-Treme Hardcore 9 showcases the many aspects of music hard dance fans are enjoying at the moment, and, judging by the midweek chart performance of this album, it's here to stay.

About The Man Behind The Hardcore Review

The Hardcore Reviewer
Welcome to The Hardcore Review. I have been a fan of UK Hardcore music for more than 10 years now, and decided I wanted to write about the music I love so much. My reviews will always have substance; if I like or dislike something, I will give an honest reason. Thanks very much for reading.